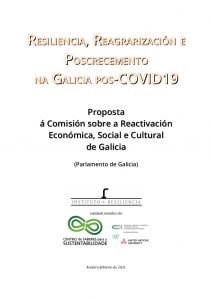 A report prepared by Manuel Casal Lodeiro, coordinator of the Instituto Resiliencia has been presented to the Galician Parliament’s non-permanent Commission on Post-COVID economic, social and cultural reactivation, that was established in late 2020.

The document is entitled Resilience, Re-agrarization and Post-Growth in the post-COVID Galicia and benefited from contributions from a number of experts in these matters both from Galicia and Spain.

The document is available for download in the website of the Centro de Saberes para a Sustentabilidade as part of its mission.

These are the concluding remarks and summary of the proposal:

The situation we have just described is characterized by the following observations:

For all this, we propose that the Commission includes in its final recomendations:

In our opinion, the proposed study could be commissioned directly by the current Parliamentary Committee, while the Resilience Plan should ideally take the form of a Bill drafted jointly by the three groups in the chamber with the greatest possible degree of consensus, to be executed at greater promptness by the Galician Government. Regarding the review of Galician projects presented to Next Generation EU as well as Galician public strategies, we suggest the establishment of a Scientific and Technical Committee on Resilience and Growth formed, among others, by experts in socioeconomic metabolism from the field of Ecological Economy.

This site uses Akismet to reduce spam. Learn how your comment data is processed.

Searching is in progress